Cultural life in Krakow – get to know Krakow’s theaters

Krakow, as the former capital of Poland, still remains an extremely important point on our cultural map. Many artistic movements developed here, and the historical complexities – including partitions – left their mark on art. Today, the City of Kings attracts with both its history and cultural life. Check which theaters in Krakow are worth visiting. 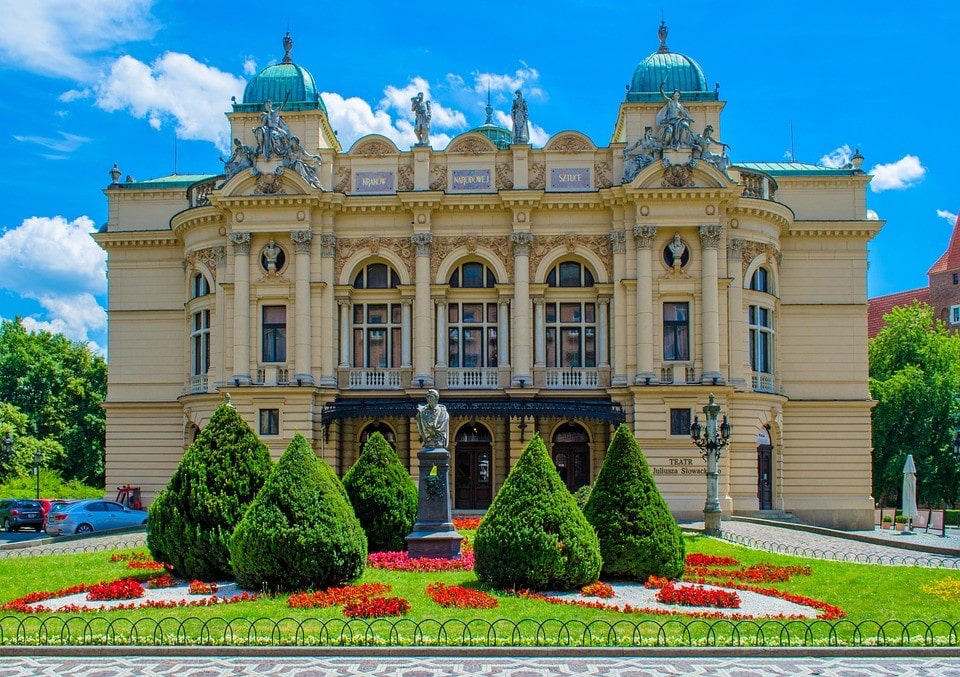 Art plays an important role in the life of every community. Although nowadays it is treated mainly as a source of entertainment and artistic sensations, it was once a manifestation of freedom and a reflection of the political situation.

During World War II, theater activities were banned or completely controlled by the occupier. This led to the emergence of underground groups that continued promoting Polish art and culture. Difficult times intensified creativity and determination. It was during this period that some individuals emerged, many of whom are still known to theater lovers. A great example is the Independent Theater (Teatr Niezależny), headed by Tadeusz Kantor – one of the greatest and most widely recognized artists.

You can’t complain about boredom in Krakow. The city hosts numerous concerts, exhibitions and festivals. The theater scene is also developing very well, and the capital of Małopolska itself honors artists by granting an annual award – the Stanisław Wyspiański’s Theater Award.

There are several repertoire theaters in Krakow. Viewers have a lot to choose from because the wide range also includes puppet shows and dance performances. Which cultural places in the City of Kings are worth visiting? Discover the recommended Krakow theaters!

The history of the institution dates back to 1918. It was designed on the model of Paris theaters, which only emphasizes the fact that the entire undertaking could boast of great momentum. According to an anecdote, the name (the word “bagatela” means “no matter”) was supposedly invented by the outstanding Polish artist – Tadeusz Boy-Żeleński, whose name has been associated with the theater since 1972.

The Bagatela Theater is located at the intersection of Karmelicka and Krupnicza Streets, in the very center of Krakow. Its perfect location allows visitors to easily combine sightseeing with experiencing cultural life. The Grand Ascot Hotel is located close to the Bagatela Theater, providing our guests with convenient access to one of the best artistic scenes of the city.

Bagatela implements ambitious projects of young artists, but can also boast of some big names. The most notable performers include: Tomasz Kot, Magdalena Walach, Urszula Grabowska and Marek Bogucki.

It is located on the Holy Spirit square (pl. Świętego Ducha), the heart of Old Town Krakow. The buildings facade already impresses many from afar – the theater was built in place of a church and was kept in an eclectic style. Its long history meant that it was under threat in the late 80s. The great motivation and help of the Polonia led to a general renovation and uplift.
Słowacki’s Theater is a unique place because it boasts an extraordinary internship – it has been operating since 1893. It is also here that the works of the greatest and most distinguished Polish culture, such as Stanisław Wyspiański or Stanisław Ignacy Witkiewicz, were staged. Theatrical hits such as “Ill with delusions” or “Play it again, Alone” were shown here.

There are currently three stages in this theater. Artistic meetings are also organized, devoted to philosophy or the exchange of cultural experiences, such as the Krakow Poetry Salon.

Tamara Arciuch, Witold Pyrkosz, Franciszek Pieczka and Jerzy Schejbal – these are just some of the big names associated with the Krakow’s Ludowy Theater. And although this institution is one of the younger theaters on the map of Krakow, it has permanently entered the cultural life of the city.

Teatr Ludowy, or the People’s Theater, is located in the Nowa Huta district and manages three stages: the Big Stage, the Carpentry Stage and the Under the Town Hall Stage. In this place you can count on original reinterpretations of the arts, and interesting projects combining various artistic fields.

This is a private theater founded in 2006 by Piotr Sieklucki. The place was created from the need to promote new creators and implement socially significant projects. The theater’s goals included activating seniors and encouraging the creation of young, ambitious artists.

The Nowy Theater is currently located at ul. Krakowska. On its scene appeared, among others: Daniel Olbrychski, Andrzej Grabowski and Piotr Cyrwus.

Stary Theater is located at ulica Jagiellonska, within a short walking distance from the Grand Ascot Hotel.